The artistic work of Jumana Manna is carried out mainly within the world of cinema and sculpture. Born in the United States (1987), Manna grew up in Jerusalem and is now based in Berlin.  Her work explores how power is articulated through relationships, often focusing on the body and materiality in relation to narratives of nationalism and histories of place.

The exhibition is showing her last two films: A Magical Substance Flows Into Me (2016), a re-staging of a radio program on Oriental Music that was aired on the Palestine Broadcasting Service in 1936, and Wild Relatives (2018) which follows a transaction of seeds between  Svalbard in the Arctic and the Bekaa Valley of Lebanon. Alongside the films are four sculptural series that  present the fragmented body in relation to its location. These include, a group of anthropomorphic vessels called the Muscle-Vase series (2015- ongoing) and The Contractor’s Heel (2016). In many of these recent projects, Manna hasbeen examining the erasures that accompany scientific preservation practices, while going beyond the false binary of pure and unchanging heritage on the one hand, and an embrace of modernisation on the other.

Scale is also present in Manna’s practice as well as in the configurations of the works in the exhibition complex. From the flat screen to the three-dimensional space her sculptures occupy, scale is an instrument for Manna’s archaeological explorations of classification methods and biological processes. Combinations of her films and sculptures create multi-layered, visceral encounters that heighten the viewers awareness of their own bodies, as well as the power structures inhabited in the discourses of the work. This exhibition is her first solo show in Spain.

ORRIAK. PUBLICATION THAT ACCOMPANIES THE EXHIBITION: 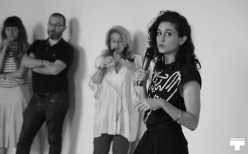