The idea for this piece was initially inspired by a large mural that Eliane Radigue  saw by chance in 1973, at the Museum of Natural History in Los Angeles. It showed the “spectrum of electromagnetic waves” moving from the largest to the smallest of known measurable wavelengths. Out of this large spectrum, there is a tiny zone from slightly less than 100 Hz to slightly more than 10 KHz that the ears of certain species populating the planet earth, have transformed into “sounds”.

Later, she discovered interesting parallels with several of her reflections on William of Ockham and his famous treatise “Ockham’s Razor”. Expressed most succinctly in his own words, “The simplest, the best”, it has been adapted and used by numerous artist/creators.

Last, came the distant recollection of a science fiction story she had read about the existence of a mythical ocean. Only the title remained etched in her memory, “Occam’s Razor”, which explains the origin of the spelling she chose. It seems in fact that the Ocean with its multiple waves allows us to symbolically be in contact with a rather large spectrum of vibrating undulations, stretching from great deep-sea swells to wavelets sparkling on a fine summer day. This explains the overall “structure” of the project.

The work mode is based on an individual “image” illustrated and evoked within each solo. Each musician is guided by his or her personal “image”. This provides the essential, letting descriptive words and evocations establish a system of communication as the piece is being elaborated, and through this intuitive-instinctive process, we are guided to the very essence of music.

There will be as many solos as there are volunteers willing to enter into this shared experience. They become the “sources”. 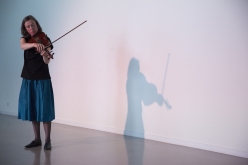