SANDRA presents songs that she forms from musical detours to what she says in them. These songs are far from what she would have always liked to do: a pop song with lots of lyrics.
If I made a comic book, poster or poster about these songs, I would pass them through my hands and eyes again.

SANDRA, is the musical project of Sandra Cuesta.
Her practice, part of the sculpture where the gesture is manifested by making transparent the phases of the methodology she applies, (through the transfer of means between drawing, sound, sculpture and image).

As for sound, she is part of Colombina's together with Larraitz Torres.
As a solo artist, he has presented his work in different contexts such as HOTSETAN (Azkuna Zentroa), Zarata Fest, Le Club Larraxkito, Ertz (Other Music Festival) .
He has recently released his first demo entitled "Desmesura" with Crystal Mine. 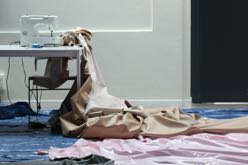