(Madrid, 1987) began studying Fine Arts at the Complutense University of Madrid and finished at the Hochschule für Bildende Künste in Hamburg. Until recently he was living and working in Berlin. Ignacio recently made a speech focusing on exploring alternatives to the current socio-political model, by means of a particular narrative and visual language, supported primarily by drawing and formal resources taken from fields such as architecture, the illustration of children's books or text, comics, heraldry and political symbolism. There are a number of recurring themes across all of his work: contradictions between theory and practice, the decisive influence of abstract ideas in specific transformation processes, the relationships of power with history and how this is reinterpreted for propaganda purposes. Through distorting crystals/glass of a different colour and thickness, we can see disturbing versions of our own world in which the mechanisms that make everything continue to function, normally hidden under layers of culture and civilisation, are exposed.

For example, we can visit the dystopian enclave founded by a small group of magnates who are so radicalised that they renounce reintegration into a post-capitalist world or walking through a theme park in which the symbolic remains of an outdated system are exhibited: a decapitated statue of Thatcher, a monument to the Euro of Frankfurt or a crumbling Chilida. 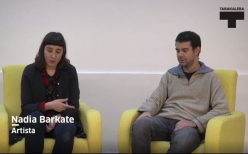