Altered states of consciousness became a widespread obsession in the late-nineteenth-century. Around the 1870s, a plethora of psychics claimed the ability to act as conduits or transmitters; much like a human radio frequency receiver, they could allegedly capture cosmic vibrations that were said to manifest in a fashion similar to electromagnetic waves, and tap into the deeper underlying structures of the universe, beneath and beyond matter.

At present, the term “altered states of consciousness” is used to describes changes in one's mental state, rather than spirit visitations. These changes can be induced recreationally or accidentally and are almost always temporary. Oftentimes however, more sinister forces may be at hand: Homeland Security, enemy agents, Big Pharma or extraterrestrial beings. Unlike stimulants, altered states of consciousness are rarely tied to functionality. Rather than inducing a higher plane of awareness, or providing a gateway for insight or wisdom, they are typically described as alienating or regressive: Dissociation from reality is no longer a socially sanctioned experience, but a menacing, mind-destroying one.

The two-day symposium will examine the reality and the fictionalization of mind-altering substances, and the shifting notions of consciousness they are tied to.

17:00 Presentation of the symposium by Ana Teixeira Pinto and Oier Etxeberria

20:00 Presentation with the artist Tamar Guimarães. 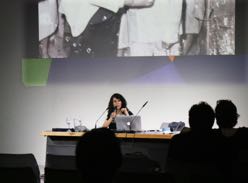