Close
Home Cultural project The Wall Emilio Moreno: The I Mine

Emilio Moreno: The I Mine

The first step towards a general history of human kind is the narrative of the self: the inner story through which you create yourself. In The I Mine paleo-anthropologists dig for our ancestors’ fossils while miners dig for diamonds. At the same time, the entries of a historian's diary reveal his personal digging for what he considers the most valuable diamond: the ‘self ’. With a poetic tone, The I Mine approaches the act of writing history through real historical people who perform as fictional characters and vice-versa in an experimental narrative about our relationship with language and the different notions of truth.​

The I Mine takes us to the South African region known as the 'Cradle of Human Kind’, an area where several species of human predecessors have been found during the last century. The most recent discovery took place there in 2013, when researchers found thousands of fossil remains belonging to an unknown hominid. This and other discoveries have been historically connected to the rich presence of diamonds in that area and, because of this, the film weaves images of those who dig in search of fossils that help us understanding who we are as a species, with images recorded 800 meters under that ground, in the mine where the most valuable diamonds in the world have been found. Different notions of value materialize as rocks – gemstones or fossils – in this area. Meanwhile, the main character wonders: Is the self a crystal clear gemstone covered by layers of writing and rewriting? 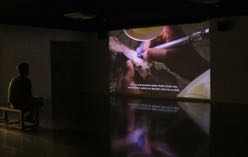