The aim of The Wall in January is to review some of the shortfilms by Lucrecia Martel and completes the Focus dedicated to the Argentinian director.

Almost ten years are gone from the last film by Martel. Meanwhile, her role transformed from one young unknown director that amazed Berlin with her debut –and pointed a new line to follow in the Argentinian cinema-, to a cult author with her own language and style in the International circuit of auteur cinema.

How did everything begin? It’s a question we usually ask ourselves when we review the work of any big author. What happened before? How did she learn to frame? Her work with the sound? And moreover: What happens inside us if we watch again or we discover for the first time, all her films? In this selection of The Wall we could access a less visible side of her filmography: her shortfilms.

Rey muerto is the work that the producer Lita Stantic watched and that gave Martel the access to her first feature film. In her own words: “it was a western as the ones I made when I was younger but a little bit better, with a bit more of knowledge, made with whatever we had, trying that experience to be our film school. It was Estaban Sapir’s first cinematography in 35mm and he put the wrong filters so the sky was orange and blue; the sound is incomprehensible; and many other things that we accepted because we were learning”.

Pescados is a collaboration with the composer and singer Juana Molina that Lucrecia made as part of the jury of Notodofilmfest and consists on some fish that dream to be cars.

Finally, Nueva Argirópolis is based somehow in Argirópolis, the capital of the confederation between Argentina, Uruguay and Paraguay that Sarmiento proposed to create in the island Martín García in 1850.

The rest of the Focus consists on the screening of the three feature films by Martel, an encounter between the public and the director, a reading-lecture by Selva Almada and the screening of Años luz (2017) by Manuel Abramovich, a portrait of Martel during the shooting of her last film, Zama. 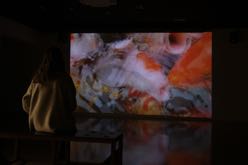 This Focus could be called “Waiting for Zama...