Political emotions in the Basque working class and feminist sensology

Emotions have marked the history of mankind and therefore of political history. In the industrial Bizkaia of 1890, a series of emotions became allied with a political approach that was new at the time – socialism – and gave rise to one of the most important historical processes of the modern era: the labour movement. This talk will show how overcoming fear, resistance to being categorised based on disgust and as animals, love within the family and solidarity were, together with the programme proposed by socialism, constituent elements of that political process.

Since the emergence of the second wave of feminism in the late 1960s, gender theory and its activist and artistic praxis have been accompanied by a philosophy of emotion – an “alternative sensology” to use Mario Perniola’s terms – which has  reassessed a number of areas concerned with feeling and has repositioned others, proposing a logic of feeling that takes elements from psychoanalysis, sociology and autobiographical and memorialist techniques. “Wherever I see that there is repression, I go for it.” Carolee Schneemann’s phrase will serve as a starting point for this exhibition. 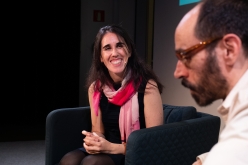