OF MY EMPTYING OF SPACE
creation of voids in empty spaces
in sculpture as experimental object
spatial emptying of the cube
of the sphere
and the cylinder
while embracing Cézanne
emptying of the polyhedron
emptying of the city
in architecture and urbanism empty the city
to see the sky
in the cinema concavity and holes
in sports places outside the world
in football
displace defences
open holes
to escape.

The project prepared for Tabakalera is a post-painterly installation that grows into the entire space of the Project Room. The starting point was to address the issue of how to handle empty space (treated as a meaningful element) and collate it with the artist’s practice. He creates a total painting installation using different sizes of cardboard boxes – understood as the simplest, most everyday units for containing empty space. Empty space thus becomes the installation’s primary building material. The painting’s constitutive elements suddenly gain depth and envelope the ceiling, while the walls are reflected in a highly-polished floor. The boxes are painted in contrasting colours - turquoise and pink, red and black. They create an abstract three dimensional painterly environment. Instead of going for trompe-l’oeil effects, as Frydrych usually does in his paintings, he allows the effect of illusion to occur through the use of rectangular colourful boxes composed in a vivid, eye-catching spatial structure.

The title of the exhibition reflects the colours that create the composition (formerly an idea for a painting on canvas). The turquoise is a tropical sea, the magenta pink is the T-mobile phone company brand and the red is lipstick, while the black is soot. Thus the project comes to form an entity that consists of both a colour-material environment and a certain set of references triggered by the colours’ names. The structure of the work is horizontal: cardboard boxes are no more important than soot, contrasting colours are no less important than T-mobile and lipstick, and the use of space is just as important as a tropical sea. The work becomes something between a painting and a set of cultural references that impose a particular way of perceiving its components (as a painterly narrative space). An order that is not an order, but something more like a handful of things taken from the fluid realities of current times.

In the Tropical sea, T-mobile, Soot, Lipstick environment, one can see a reflection upon the meaning of empty space (the essence of the void generating both spiritual and physical energy) of the sort employed by Jorge Oteiza (construcciones vacias, cajas metafisicas).  The installation also lies in a line of thinking that stems from neo-materialism.

This project has been produced for Tabakalera with the collaboration of the Polish Institute in Madrid. 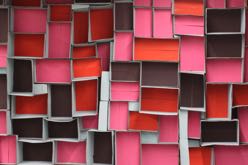 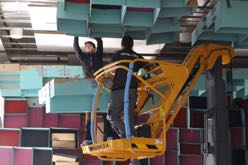 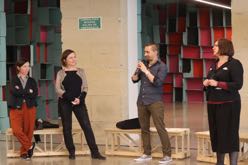