Estudiotik at. Five Years of Creation

The creative process that leads to a work of art is often relegated to an invisible plane and usually takes place in the artist's studio, away from the exhibition hall. Estudiotik At. 5 Years of Creation is an exhibition that showcases the creative work that takes place in the artists’ studios in Tabakalera. We present a selection of works developed in the artists’ studios in the production centre on Tabakalera’s third floor and we facilitate movement between the exhibition hall and the studios to show their interdependence in a material manner.

Tabakalera’s international artist residency programme has positioned the centre as a leader in its field. The six calls for projects, issued throughout the centre’s five-year existence, means it is now possible to exhibit the 38 projects that comprise Estudiotik At. Ever since Tabakalera opened its doors in 2015 as an international centre for contemporary culture, the Artist’s Space has welcomed almost a hundred creators and projects of different origins and covering various disciplines and formats.

This is the first time that Tabakalera has shone a light on the projects undertaken by artists in the studios, behind closed doors, during their residencies. It also reveals the inseparable nature of the creative process in the studio and the subsequent public exhibition. The exhibition highlights the artistic work that Tabakalera supports and allows the public to interact with the pieces in a more natural and open way.

With the participation of the following artists: 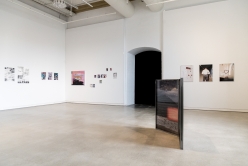